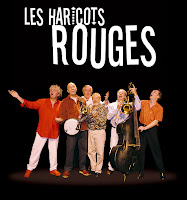 Okay, jazz fans, I know you think I’ve abandoned you in favor of French political scandals and Parisian food—both of which, you must admit, are titillating. But don’t despair: I remain a jazzman at heart so here is an update on my musical acivities:

Last Friday, I flew down to the southwestern city of Pau to play a concert with some French musicians (and my New Orleans buddy Tom Saunders on bass). It was supposed to be an outdoor event in the garden of a local chateau, followed by an open-air projection of the film “West Side Story.” But the forecast called for heavy showers—being at the foot of the Pyrenees, Pau often has extreme weather—so it was moved to an inside auditorium on the outskirts of town. Apparently a lot of people didn’t get word of the venue change, and a lot of soccer fans were doubtless glued to their TV screens by a World Cup match. So we wound up playing for only a hundred people or so. But the crowd, such as it was, was enthusiastic, clapped along, and even demanded un bis (which, believe it or not, is French for "encore").

The best thing about the experience was the chance to get together with some of my old French jazz buddies. Two of them, drummer Michel Senamaud and pianist Pierre Jean, were members of the “Haricots Rouges” (Red Beans) when they came to New Orleans for Jazzfest in 1971. I met them on that occasion, at a mammoth jam session at a place called Bonaparte’s Retreat on Decatur Street. I was impressed with their swing and energy and naturally found them exotic because they spoke French. I told them I was headed to Oxford in the Fall and they promised to invite me to play with them in Paris. I thought they’d forget, but a I got a letter from clarinetist Gérard Tarquin (since retired) in October asking me to come play at an all night concert in Paris—Le Jazz Band Ball. So I took a ferry over and saw Paris for the first time on a foggy autumn evening. The music was great—there were at least ten bands—and the red wine and calvados flowed. It was the very next morning that I met my future (and present) wife Sylvaine in the street while playing with the Haricots Rougues at a ribbon cutting for a new supermarket. She lived in the neighborhood and had come down to buy croissants for her breakfast. It was love at first sight.

Later, when I lived in France, I often played with Michel and Pierre and other French musicians that I met on that occasion. It’s hard to believe that we’ve been friends now for nearly four decades. The good news is that we’ve all gotten better over the years. Michel is one of the best, perhaps THE best New Orleans-style drummer in Europe. And Pierre Jean, who also plays trumpet, is a first-rate pianist and bon vivant.

After he left the Haricots Rouges in the 70s, Pierre got a job organizing events for the Mayor of Cannes. When I returned as Time Paris Bureau Chief in 1992, he invited me, along with the Haricots and a bunch of other French musicians, to take part in the Cannes Jazz Festival. I went down there with Sylvaine and my son Juilan (then about 12) and we had a ball. They put us up in one of the top hotels—the Martinez—and wined and dined us as if we were stars. Of course the real stars at that festival were people like Ray Charles. We were just window dressing.

Pierre invited us back the next year and I was starting to think I was onto a good thing. But all good things must part, as the old New Orleans drummer Sammy Penn used to say: Pierre’s boss, Mayor Michel Mouillot, was jailed for corruption and that was then end of the festival. And Pierre’s job. He since moved back to Paris and rejoined the Haricots Rouges.

French President Nicolas Sarkozy is rearranging the deck chairs on the Titanic.
Under pressure to dismiss Labor Minister Eric Woerth, who is ensnared in a double conflict of interest (see following post), Sarkozy yesterday threw some ballast overboard by firing two second-echelon cabinet members: Secretary for Cooperation Alain Joyandet and Secretary for the Paris Region Christian Blanc.
Both men had sinned by wasting taxpayer money at a time when the government is calling for austerity and belt tightening. Joyandet had hired a private jet to attend a conference in Haiti at a cost of some $150,000, while Blanc spent $15,000 of state money on Havana cigars. Revelations about the two men's profligate ways caused a public furor and led Sarkozy to announce a draconian slash in his cabinet members' perks and operating budgets. (The austerity apparently does not apply to Sarkozy himself, who has seen his own salary increase by 150% and has recently ordered a brand new presidential plane to compete with Air Force One. Price: more than $200 million.)
Sarkozy (current approval rating: around 30%) is gambling that the dismissals and cutbacks will deflate public indignation and political opposition over the Woerth-Bettencourt scandal (see blow). But in a week in which it was revealed that Liliane Bettencourt, France's richest woman, received a $40 million tax rebate while Woerth was Budget Minister, it seems doubtful that Sarkozy's gambit will work.
Stay tuned.
Posted by Tom Sancton at 2:51 AM No comments: