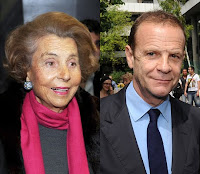 After three years of litigation that dominated French headlines and shook the government of President Nicolas Sarkozy, L’Oréal heiress Liliane Bettencourt and her daughter, Françoise Bettencourt-Meyers, have agreed to bury the hatchet.

In a move apparently intended to consolidate the family’s control over L’Oréal, the world’s leading cosmetics conglomerate, the two women announced via a joint communiqué on Monday that they were dropping the suits and countersuits that had divided them since December 2007.

[Read my complete article on the Vanity Fair website: http://www.vanityfair.com/online/daily/2010/12/after-three-years-of-litigation.html]

Posted by Tom Sancton at 9:32 AM No comments: