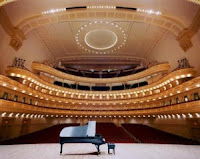 Guy walks into a midtown Manhattan bar and asks the bartender, "Say, can you tell me how I can get to Carnegie Hall?" The bartender answers: "Practice, man, practice!"
Seriously, one of my life's ambitions will be achieved on Saturday, January 7, when I appear as a guest performer with the Preservation Hall Jazz Band at their big 50th anniversary concert at Carnegie. The sold-out show is a fund raiser for the Preservation Hall Foundation and will feature a number of guest artists (including yours truly) in addition to the PHJB. Del McCoury's bluegrass group and the indie rock band My Morning Jacket will be on the bill, among others. Looking forward to this! 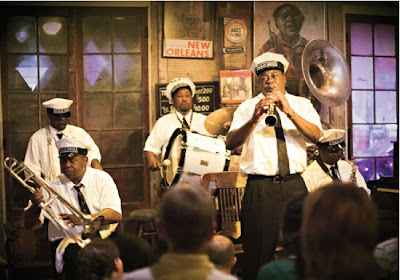 [Here is the text of my "spotlight" piece as it appeared in the January 2012 print edition of Vanity Fair. This is only a teaser! The full 4600-word piece is on the VF website and iPad apps with music, photos, bells and whistles. Check the link at the end of this post.]

It is arguably the best-known address in New Orleans: 726 St. Peter Street, even better known as Preservation Hall. Since its opening day, June 10, 1961, more than two million people have walked through its gate, including presidents, prime ministers, movie stars, and rock idols. Every night, tourists and locals form long lines to pony up the $12 entrance fee and sit on rough wooden benches and threadbare cushions in a musty, un-air-conditioned, 31-by-20-foot room. The attraction? Three sets of traditional New Orleans jazz played by five to seven musicians in black suits, white shirts, and black ties. The place and the routine are exactly as they were in the 60s, but some things have changed: the all-black bands are now racially mixed; the average age of the players is considerably younger; the crowds are much bigger. The most amazing thing is that this music—rooted in blues, ragtime, and march- es from the turn of the 20th century—is still being played at all. Before the hall was launched, in a former art gallery, the aging ranks of the city’s black jazz musicians seemed headed for extinction. Under the skillful man- agement of Pennsylvania transplants Allan and Sandra Jaffe, Preservation Hall soon gave these old jazzmen and their music a new lease on life and ultimately turned the nickel-and-dime-kitty hall—where the band played for tips dropped into a wicker basket—into a thriving business. But as the end nears for this golden-anniversary year—marked by major exhibitions at the Ogden Museum of Southern Art and the old U.S. Mint museum, a spate of publications, and a series of high-profile concerts around the country—the current keepers of the flame face daunting questions: With all of the original musicians dead and gone, an aging audience base, and a popular culture invested more in hip-hop than in old-time jazz, what are you preserving? And how long can you keep it up? Ben Jaffe, 40, son of the founders, has an optimistic answer: “This anniversary is about the next 50 years.”