BABY IT'S COLD INSIDE! 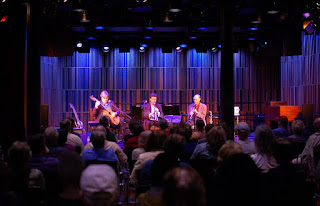 The Classic Jazz Trio had a great time playing in the new performance space at the Old U.S. Mint on Saturday despite an air conditioning malfunction that kept temperatures in the 50s. Outside on the it was 75º. Fortunately, our fans (we have fans?) were not deterred by the chill. The place was packed and the response was enthusiastic. The state of the art performance space was wonderful to play in—the acoustics, lighting and sound system were all tops as was the helpful staff of National Jazz Park rangers, who run the weekly concert series at the Mint.
Posted by Tom Sancton at 12:41 PM No comments:

THE CJT HOLDS UP THE U.S. MINT 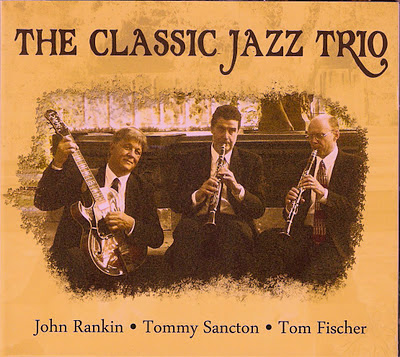 The Classic Jazz Trio makes another rare live appearance on Saturday, Jan. 21, at the Old U.S. Mint, 400 Esplanade, 2:00 pm to 3:30 pm. For those who haven't checked out the new state-of-the-art performance space on the third floor, it's a good time to do so. Also a chance to visit the remarkable exhibit commemorating the 50th anniversary of Preservation Hall on the second floor. The CJT will be reprising tunes from our latest album (see photo) as well as a few new additions to the repertoire. The CD will be on sale, as well as copies of "Song For My Fathers."
Posted by Tom Sancton at 3:23 PM No comments:

A NIGHT TO REMEMBER! 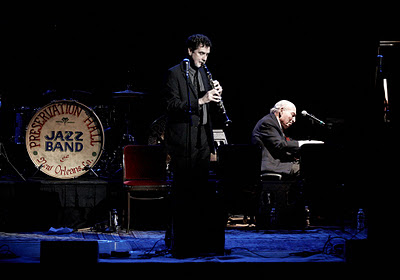 The concert was billed as "Preservation Hall Jazz Band & Friends." Touted in advance in the New Yorker and the New York Times Magazine, the event, a benefit for the Preservation Hall Music Outreach Program, filled Carnegie's Isaac Stern Auditorium to its full 2204-seat capacity. The performing "friends" included a star-studded cast of musicians ranging from Allen Toussaint, Tombone Shorty and Mos Def to My Morning Jacket, the Del McCoury Bluegrass Band, the Trey McIntyre Dance Project and the Blind Boys of Alabama. And of course, the Preservation Hall Jazz Band, headed by Ben Jaffe, son of the founders and organizer of this exceptional show.
What am I doing at Carnegie Hall, I asked myself more than once. Nonetheless, when the show started, there I was onstage with the legendary festival promoter and pianist George Wein seated at the Steinway behind me. I recited a passage from my memoir, Song for My Fathers, and played "Burgundy Street Blues" as a tribute to George Lewis and the other great jazzmen who played at the Hall when it was founded half a century ago. Wein and I were onstage for all of eight minutes, but it was for me an unforgettable occasion. (See photo by Michael Jurick, whose wonderful pictures of the show are well worth viewing on his blog http://goo.gl/DZZJY)
The good thing about getting my bit over early was that I could enjoy the rest of the show from the wings. High points for me included meeting and chatting with the legendary Pete Seeger (whose grandson Tao Seeger performed in the show), watching the Trey McIntyre dancers, reminiscing with my old friend trombonist Frank Demond, talking shop with PHJB clarinetist Charlie Gabriel, and hearing the indie rock group My Morning Jacket bend its sound to the beat of a New Orleans jazz band on "Saint James Infirmary" then do its own thing on a folk-rock ballad "I Feel Wonderful." The cast party afterwards at the trendy downtown cabaret club called "The Box" was a bit hard on the ears, but I had a chance to chat there with Morning Jacket's lead singer Jim James, who told me he's taking up the clarinet. That was good news: if rock stars popularize the instrument, guys like me might still have a shot at the big-time at last!
(See Jon Pareles's review in the New York Times:
http://www.nytimes.com/2012/01/10/arts/music/preservation-hall-jazz-band-at-carnegie-hall-review.html?_r=1&scp=1&sq=preservation%20hall%20pareles&st=cse)
Posted by Tom Sancton at 7:14 AM No comments: