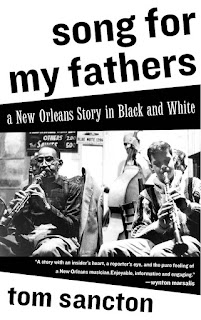 [from Tennessee Williams Festival website]
Song for My Fathers

Hailed as a “newly minted classic” by The Times-Picayune, this heartwarming story about a boy growing up in the 60s and learning to play jazz from the veteran musicians at Preservation Hall comes to life in the form of Sancton’s narrations, audio-visual projections, dramatizations and musical interludes provided by the onstage band. The Song For My Fathers stage show debuted at Tulane’s Dixon Hall in 2010 and played to packed houses at the Chat Noir in 2011. Now it comes to the new state-of-the-art performance hall at the Old U.S. Mint, which is currently hosting a year-long exhibit celebrating the 50th anniversary of Preservation Hall’s founding.

Come view the exhibit as part of an intimate cocktail reception before experiencing Sancton’s guided musical tour in this unique multimedia stage production that blurs the lines between personal journey and historic account. It’s a history lesson that will have you dancing in the aisles.

Another one of the great pleasures of working on the Tennessee Williams Festival is the chance to catch up with old friends. It’s been a pleasure to know Tom Sancton and a delight to see his wonderful memoir, Song for My Fathers: A New Orleans Story in Black and White, metamorphose from page to stage. He’ll be performing with the Preservation Hall Jazz Band at the Festival’s gala Wednesday night at the Mint.

Here’s a glimpse into his life on and off stage.

Performing in the musical adaptation of your book, Song for My Fathers, must be a little bit like walking around in your own past, isn’t it?

That’s exactly what it is like. As with any memoir, the process of writing the book required a long, deep plunge into my past. That was a mental process of memory, imagination, reconstruction. The stage show is a different way of reliving the past in that I don’t just tell the story; I must evoke it physically and visually. The presence of the band, the young man who represents me as a teenager, and the audiovisual elements, bring the story to life onstage in real time. So being in the middle of that is not merely relating the past but re-enacting it. At times, it is almost like an out-of-body experience, especially when I watch Zach Young play little Tommy Sancton taking a clarinet lesson from George Lewis and sitting in with the band.

Has the experience of this book been transformative for you?

Absolutely. The writing itself was a transformative experience. But the really significant transformations are the ones that followed the publication of Song For My Fathers in 2006. In a very real sense, it was the book that brought me back to New Orleans after living away for 40 years, much of that time in Paris. In the wake of Katrina, I had wanted to come back here to re-connect with my roots and be closer to my family. The book was the vector that brought me home. Here’s how it happened: Tulane University chose it for their Fall Reading Program that year and invited me to come give a lecture in October 2006. That led to discussions about coming to teach at Tulane and resulted in my being named the Andrew W. Mellon Professor in the Humanities for the 2007-08 academic year. My teaching role at Tulane was subsequently extended for three years beyond that. In the meantime, I became active as a musician and writer, re-connected with old friends and made new ones, and became thoroughly anchored again in my home town.

Does doing the musical version somehow complete the book in a new way for you? (I know many poets who say that the poem isn’t finished until it’s read aloud and heard.)

Yes. Relating the story out loud, re-enacting the events with the audiovisual elements and live music, connects it to an audience in a way that goes far beyond words on a printed page. As with my music, I feel like it doesn’t really exist until an audience hears it.

Do you have a new book in the works?

I am putting the finishing touches on a novel set in a little fishing village in Normandy. It takes place in the contemporary time frame with flashbacks to the Nazi Occupation during World War II. The story has elements of a thriller, a detective story, a historical novel and a literary novel, through the story of a young couple that moves to this town and is confronted with a dramatic series of events that transform — and threaten — their lives.

You’ll also be moderating a panel about books about music at the Festival. Is that something you read for pleasure?

Actually, I don’t read a lot of music books. This may seem paradoxical, since Song For My Fathers is to a large extent a book about music and musicians in addition to being a coming-of-age memoir. But music is something I experience most intensely through my playing, and through listening to other musicians play. When I happen to read music books, as I am doing in preparation for this panel, I do enjoy them as they tend to tell great stories about musicians and their lives — and all good writing, after all, is about storytelling.

And are you here to stay now? Still spending summers in France?

Yes, I am here to stay — but with one foot still planted in France. My French wife Sylvaine, a sculptor, painter and photographer, has made a place for herself in the New Orleans art world. I have picked up an active life here with my music and writing. But France still occupies a big place in our hearts. We are fortunate enough to have a house over there, so we can return periodically — especially during the scorching New Orleans summers. In short, we enjoy the best of both worlds.

Posted by Tom Sancton at 1:20 PM No comments: 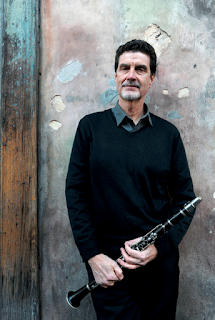 From the March 2012 edition of New Orleans Magazine:
SPOTLIGHT
Memories of Music

Playwright Tennessee Williams wrote in The Glass Menagerie, “In memory everything seems to happen to music.” This year at the annual Tennessee Williams/New Orleans Literary Festival, local musician, writer and educator Tom Sancton will kick off the celebration on March 21 at The Old U.S. Mint with “Song for My Fathers,” a multimedia autobiographical performance that celebrates the city’s music and pays a heartfelt tribute to those who taught it to him. Based on his memoir, “Song For My Fathers” weaves live music from the Preservation Hall Jazz Band with Sancton’s personal experiences, offering glimpses into an era that remains a powerful influence on our culture.

What is this performance about? “Song for My Fathers” is the story of a young white middle-class kid’s encounter with a group of elderly black jazz musicians at the tail end of the segregation era in the 1960s. The boy learns to play their music and gets a privileged lesson on life, culture and humanity from his willing mentors. That is the central theme of both the book and the stage show version.

Who’s involved? Ben Jaffe [of Preservation Hall] is the overall producer. Staging and direction were handled by Ron Rona of Preservation Hall; he was also the one who put together the terrific audio-visual package. I am present as the narrator. The Preservation Hall Jazz Band is on stage and provides live music, and we have a young man, Zach Young, who plays me as a teenager.

How does it tie in with the festival? It ties in with the festival in several ways. First, it’s theater – not an actual play, but certainly a theatrical presentation. Secondly, it’s based on a literary work, my coming-of-age memoir. Thirdly, it celebrates New Orleans culture and musical history. I have been involved in the festival in various capacities for the past few years and like to consider myself part of the Tennessee Williams Festival “family.”