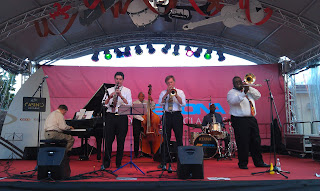 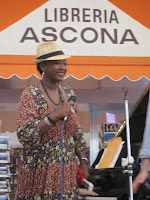 My New Orleans Legacy Band hit the road earlier this summer on a 10-day tour of Switzerland and Germany, June 19 - June 30. High points were jazz festivals in St. Gallen and Rapperswil, and of course the JazzAscona Festival on the beautiful shores of Lake Maggiore. I have been playing at Ascona off and on since 1989, and it is always a thrill to return to this charming lakeside town with its winding alleys and pastel-colored Italianate buildings set against the backdrop of Alpine hills. With five outdoor stages, Ascona was a great listening experence for us as well as a privileged venue for our own concerts. Standouts among the bands we heard were trumpeter/trombonist Wycliff Gordon's tribute to Louis Armstrong featuring the spectacular drumming of New Orleans's own Herlin Riley; Trombonist Dan Barnett's Australians; and Germany's Maryland Jazz Band featuring my old friend and fellow clarinetist John Defferary. My own band--Clive Wilson (tpt), Lars Edegran (pno), Ronell Johnson (trombone), Richard Moten (bass), Walter Harris (drums), and myself--was joined for the occasion by the soulful and dynamic London-based singer Denise Gordon. Also along on the trip was Rachel Johnson, Ronell's lovely bride of one year, who got her first taste of Europe on the tour and took these pictures. It all ended too soon, but we hope to do a repeat performance in 2013. It's a great way to beat the N.O. heat! 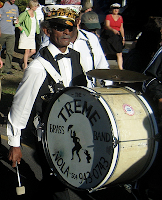 Uncle Lionel Batiste, a popular bass drummer, singer and colorful character on the New Orleans music scene since the 1940s, died on July 8 at the age of 81. He was a longtime member of the Treme Brass Band and was frequently featured on the HBO series "Treme," which used his iconic image in its publicity and posters. Gaunt-faced and skinny as a drumstick, always dressed to the nines, he was a familiar figure in the Frenchmen Street music clubs and the Palm Court Jazz Cafe. He would regularly show up, unannounced, whirl a pretty girl around the dance floor, then grab the microphone and sing a blues or ballad to the delight of the audience and musicians alike. His warm, humorous singing style was captured on several CD's including two produced by pianist Lars Edegran. I had the honor of accompanying him on several tracks, as well as in this video of "Let Me Call You Sweetheart" shot in the Palm Court last March: http://www.youtube.com/watch?v=d76EJDdlYJU

Colorful and flashy till the end, Uncle Lionel had a wake that was probably unique in the history of the undertaking profession: instead of being laid out in a casket, he was displayed standing up, leaning against a faux lamp post, dressed in his sporting clothes with his hands covered with the rings and jewelry that were part of his trademark. Check out Keith Spera's account and accompanying photographs: http://www.nola.com/music/index.ssf/2012/07/uncle_lionel_batiste_gets_send.html

Posted by Tom Sancton at 1:46 AM No comments: 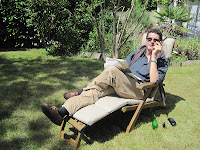 I'm spending the summer in Europe, playing at a couple of festivals, but mainly just chilling out with Sylvaine at our place near Paris and waiting out the hot weather in New Orleans. Planning to complete revisions on my new novel, read a bunch of books, enjoy some great food, see some French movies and generally enjoy myself. See you in September!
Posted by Tom Sancton at 1:39 PM No comments:

STRAUSS-KAHN: OUT IN THE COLD

You heard it here first, folks. Back in August 2011, when sexual assault charges against former IMF President Dominique Strauss-Kahn were dropped, I predicted that his stand-by-her-man wife Anne Sinclair would give him his walking papers after dumping millions on his legal defense and living expenses in New York. (http://tomsancton.blogspot.fr/2011/08/dsk-off-hook-but-still-in-doghouse.html)  It took her almost a year, but that is apparently what has happened according to French news reports. Sinclair, recently named the editor of a new French edition of the Huffington Post, has reportedly kicked the disgraced former presidential hopeful out of their conjugal apartment on the Place des Vosges. (http://www.nytimes.com/2012/06/30/world/europe/strauss-kahn-and-sinclair-separate-french-tabloid-reports.html) Strauss-Kahn may be out in the cold, but not out of hot water: he still faces charges in connection with his alleged involvement in a prostitution ring based in the northern French city of Lille.
Posted by Tom Sancton at 10:00 AM No comments: