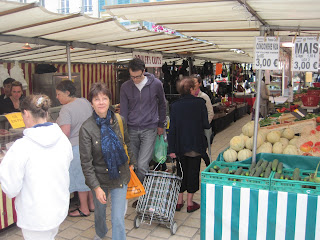 Open-air markets are an age-old tradition in France. In Saint Germain-en-Laye, the town we live in some 10 miles west of Paris, there are markets on Tuesdays, Fridays, and Sundays. The marketplace covers an area half the size of a football field on a paved square surrounded by 18th and 19th century apartment buildings. At one end of the square, there is an arcaded row of shops and cafes; the other end is occupied by the post office. In the middle of the square there is a fountain that jets up from ground level. In hot weather, kids run or ride their bikes through it, pealing with laughter as they soak themselves to the bone. 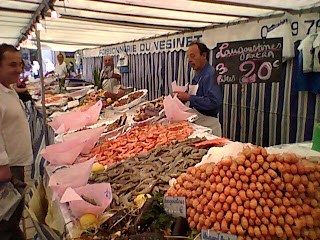 On market days, they turn off the fountain and the whole square is covered with stalls selling everything from fresh fruit and produce to fish, meat (including horse meat and rabbit of course), wild game (in season), pots and pans, clothing. The colors are vibrant—red tomatoes and radishes; green lettuce, zucchini, avocados; orange apricots; yellow lemons and grapefruit. There are a dozen kinds of whole fish on beds of shaved ice—tuna, salmon, bass, trout, mackerel, swordfish, sprats, sardines, skate, sole, rougets (small redfish)—and mounds of oysters, mussels, clams, shrimp, lobsters, crayfish (called ecrévisse, nothing like our crawfish). In season (November through January), you can see wild rabbit, hare, even whole deer, hanging by their hooves in their full coats of fur. And hovering over it all is the sound of voices—vendors hawking their wares with a cacophony of shouts and chants. 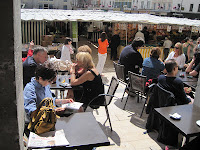 Sylvaine and I like to go into town on the market days, not just to shop, but to take in the spectacle. I usually get a Herald-Tribune or a French newspaper (unlike New Orleans, you can choose between five or six different dailies) and take a table at a sidewalk café facing the market. The one I prefer is called the Café de l’Industrie. The interior was recently redone and still seems a little strange to me—too clean, too modern--but outside on the terrace, under a burgundy-colored parasol, with a cup of expresso and my paper, I feel right at home. Even after all these years, it always feels like I’m on vacation when I’m on the terrace of l’Industrie. 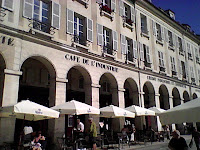 We have what the French call “nos habitudes” at l’Industrie. One of the waiters used to go out with our daughter, and he always greets us warmly. His name is Franck with a “c”. He is about 40 now, jowly and thick-waisted in place of the trim figure he had when we first met. He sports a gold-stud ear-ring. Franck has been a garçon de café since he was 18. His father retired from the same place several years back after 50 years of wearing the traditional white apron and wielding trays full of coffee and beer and wine. You hear a lot of talk about jobs of the future, but for a lot of people here, the jobs of the past suit them just fine. Franck is a happy man, supports a wife and two kids, does his job well and seems to enjoy it.
So do the truck farmers, butchers, fishermen, and vendors on the market place. Most of the vendors keep up a steady chatter, talking to the customers, joking with one another, hawking their wares with rhythmic chants.  Nothing is pre-packaged. You want cheese? Tell them how much you want and they’ll slice it right there and wrap it up in colored wax paper. Same with meat—beef, veal, lamb, pork, horse, rabbit, chicken, duck. All cut and prepared to order. Ditto the fish, gutted, cleaned and scaled before your eyes.
You can see how European marketplaces formed the center of social and economic life over the centuries. What is bought and sold there now forms only a fraction of overall commerce in France—the supermarkes and hypermarkets and Walmart equivalents dominate here as elsewhere—but the social function of the market remains. Sylvaine has a relationship with the vendors—they recognize her, know what she likes, exchange banter and pleasantries with her. We run into neighbors, acquaintances or just familiar faces of people we see regularly but don’t know. Even after our long absence, the vendors recognized her, asked about her “séjour” in the U.S. And even the vendors she doesn’t like, and avoids, are part of this market-centered social life. (“Don’t buy anything from this greengrocer, he sold me rotten peaches last year.”) Sylvaine hardly ever buys food in a supermarket. There is an open-air market somewhere nearby—St. Germain, Le Vesinet, Chatou--almost every day of the week.