KIRKUS REVIEW OF MY NEW BOOK 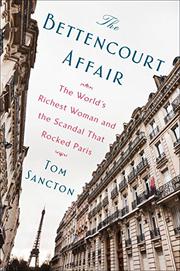 
As the daughter of L’Oréal founder Eugène Schueller, Liliane Bettencourt (b. 1922) is the wealthiest woman in the world—wealthy enough, in fact, to have lost nearly 25 million euros in Bernie Madoff’s scheme. While former Time Paris bureau chief Sancton (Song for My Fathers, 2010, etc.) tells the story of Bettencourt’s daughter’s suit against Liliane’s dear friend François-Marie Banier, he also provides an eye-opening look into the French judicial system. Based on Napoleonic code, it is a system that seems made to delay final decisions as cases wend their ways through the different court systems. Françoise Meyers brought the case against Banier for abus de faiblesse, or exploitation of weakness, in 2007, just after the onset of Liliane’s mental confusion. Françoise was a talented author and musician but never pleased Liliane. Her mother, nearly deaf, enjoyed Banier’s company and was uncharacteristically generous to him. She financed his artistic activities and gave him real estate and financial contracts for millions, not to mention the occasional check for 100,000 or 200,000 euros. Her gifts were extremely lavish, by some estimates totaling over 1 billion euros, considerable for a woman well known as a penny pincher. Banier was already a successful artist and photographer when he met Liliane, but he was also an abused child always searching for a replacement mother. What he gave her was liberation from the formal life she led. He was handsome, quirky, and a great conversationalist. Her husband, André, was warned about her gifts, but he decreed that it was her money to do with as she pleased, a stance that echoed the attitudes of her financial advisers and notary at first. André served in successive governments, due for the most part not to talent but to small brown envelopes handed to candidates.
A well-researched, crisply written, and entertaining story of family, greed, wealth, and the complex relations among them.
Posted by Tom Sancton at 10:09 AM No comments: