As France is roiled by the violence, momentum, and expanding demands of the gilets jaunes,the nation’s princely president may be facing a one-term reign. 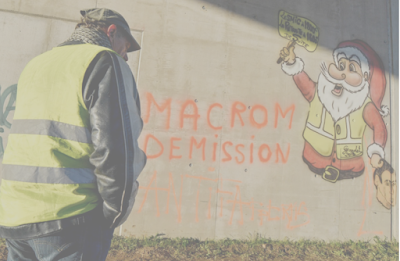 Graffiti with the inscription “Macron resignation” is seen in Aimargues on December 11, 2018. By Pascal Guyot/AFP/Getty Images.

Burning cars. Flaming barricades. Police vans and armored vehicles. Clouds of tear gas. The images of Paris flickering across TV screens and smartphones around the world might give the impression that France is once again on the verge of a revolution. Things have not gone that far—yet—but for the past four weeks, the country has been in the grips of an explosion of anger by hundreds of thousands of ordinary men and women fed up with high taxes, low salaries, and, especially, the autocratic governing style of President Emmanuel Macron,who seemed very much in control when I interviewed him this past March for a Vanity Fair profile.

When he won election in May 2017, at the age of 39, Macron was hailed as a young innovator who had promised to modernize the French economy, restore competitiveness, and break with a widely discredited status quo. Now, just 19 months later, his presidency is seriously challenged by an ad-hoc popular movement known as the gilets jaunes,or yellow vests, for the roadside security pullovers they have adopted as a uniform. What began in October as a protest against a gasoline-tax hike has since snowballed into an amorphous, largely leaderless force pushing a smorgasbord of more than 40 demands ranging from across-the-board salary increases and better public services to the dissolution of the National Assembly and the resignation of Monsieur Macron.

Almost from the beginning of his time in the Élysée, Macron, a former investment banker who had never run for public office, was widely perceived as a “president of the rich” because of the tax breaks he gave to French companies and the affluent classes, and especially for his suppression of a long-standing wealth tax, the so-called I.S.F. His top-down approach to governing—“Jupiterian” in his own words—was seen by many as anti-democratic, even as his language sometimes denoted a contempt for la France d’en bas—those on the lower rungs of the socio-economic ladder. To make matters worse, Macron was seen as an arrogant product of a Parisian elite that was out of touch with and indifferent to the plight of those in the provinces.
e...
And that’s where the trouble began, out in the economically depressed rural areas and smaller towns where most people are obliged to use their cars to get to work. Angered by the steady rise in gasoline prices, especially an eco tax that had been scheduled to increase in January, groups of protesters began to coalesce via social-media links. By the end of October, yellow-vest squads were sporadically blocking roads and intersections around the country to demand the cancellation of the eco tax, emboldened by polls showing widespread public support. On Saturday, November 17, and for the three successive Saturdays, yellow vests converged on the capital for supposedly peaceful demonstrations that degenerated into violence when radical right- and left-wing groups seized the occasion to smash store windows and attack public monuments, including the Arc de Triomphe. Police responded with tear gas, stun grenades, and water cannon, arresting more than 4,500 for acts of vandalism and aggression.

Prime Minister Édouard Philippe’sattempts to negotiate with the yellow vests went nowhere, since the largely unstructured grassroots movement had no recognized leaders. On December 5, the government finally announced the cancellation of the planned eco-tax hike. Two weeks earlier, that might have satisfied the protesters, but by this time their demands had proliferated, with increasingly strident chants of Macron, démission!—Macron, resign.
On Monday, after a roughly four-hour consultation with union, political, and business leaders, Macron himself faced the nation in a solemn 13-minute address meant to calm the protests and assuage the nation. His face drawn by fatigue, with a visible stubble on his sunken cheeks, he declared a “state of economic and social emergency.” While calling for an end to the “inadmissible violence,” he voiced sympathy for the “distress” of lower wage earners, and offered a rare mea culpa for having “hurt some of you with my words.”
Specifically, Macron offered a set of concessions, including a €100 (about $114) increase in the monthly minimum wage; year-end bonuses to private-sector employees; reduced Social Security taxes on monthly pensions under €2,000 (around $2,264); and the suppression of taxes on overtime pay. But he explicitly ruled out reinstating the I.S.F. wealth tax, a key yellow-vest demand. Government officials estimated the cost of these measures could reach as high as €10 billion (approximately $11.3 billion), and it remained to be seen how they would be funded. Beyond those material incentives, the president called for a national debate on the reorganization of the government, more democratic voting procedures, improved public services, and even the volatile questions of immigration and national identity, a key issue for the French right.

Across the country, the protesters generally greeted Macron’s speech with skepticism and contempt. Benjamin Cauchy,founder of a group called the Free Yellow Vests, mocked the president’s proposals as “mini-measures,” saying his refusal to restore the wealth tax proves that he is “the president of the rich.” Christophe Torrent,another activist, called the offers “largely insufficient,” and demanded a referendum on the group’s demands. Others in the movement found Macron insincere and rejected his offers as “too little, too late.” Overwhelmingly, they called for a fifth round of Paris protests this Saturday.

While Macron vowed to “stay the course” on his ambitious plans to reform the French economy, his main focus going forward will be to shore up his waning support in France, where his poll ratings hover in the low 20s. Macron’s political weakness at home also dampens his hopes of emerging as the European Union’s key leader once Germany’s Angela Merkel leaves power.

Despite the negative response from the yellow vests, there are signs that Macron’s speech may have helped him with the public at large: according to an OpinionWay poll, 49 percent found his speech convincing, with approval of his specific measures ranging from 60 percent to 78 percent. Most important for the president, 54 percent want the protests to end. That probably won’t prevent the yellow vests from converging on Paris this Saturday, but it does offer hope that the unrest might settle down by Christmas.

That said, it is difficult to imagine how Macron will survive this over the long haul. The president’s outright resignation seems unlikely: he was solidly elected to a five-year term and his party, La République en Marche (Republic on the Move), holds an overwhelming parliamentary majority until at least 2022. But Macron’s aura of invulnerability has been shattered. From the beginning, he defiantly vowed that, unlike previous leaders, he would never capitulate to street protests in the pursuit of his reforms. Indeed, he coolly rammed through a revision of the labor code and a restructuring of the national railroad in the face of widespread strikes. This time, he blinked, and his ability to put through unpopular reforms is much diminished.

Meanwhile, the populist far-right National Front, recently renamed National Rally, is poised to make big gains in next spring’s European Parliament elections. Its leader, Marine Le Pen, defeated by Macron in 2017, will be itching for a presidential rematch in 2022. Though Macron may well survive in office until then, the real danger is that France might eventually go the way of Italy, Hungary, and Austria in embracing a right-wing populist regime. Steve Bannon must be licking his lips.