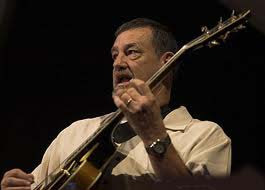 Steve Blailock had moved to Texas by the time I arrived in New Orleans in 2007, but he was the kind of guy that people talked about even when he wasn't there. I met him at the Palm Court during one of his periodic visits and he more than lived up to his reputation as a passionate and inventive jazz guitarist. His whole body would get into the music—feet stomping, head nodding, torso rocking forward and back as played. He could play any kind of music, but was especially impressive on blues numbers like "Trouble in Mind" or "Careless Love" where his Mississippi Delta roots came through loud and clear. I played with him from time to time when he was in town, and though I did not know him as well as some of the guys he had played with regularly during his New Orleans years, I felt a special bond with him. Maybe it was his Mississippi accent, which reminded me of my Mother's family in Jackson; maybe it was the good-old-boy warmth of his manner and the unaffected enthusiasm he exuded whenever he was on the bandstand. We always greeted each other with a big bear hug and enjoyed playing together. I knew he had had trouble with drugs and alcohol in the past, and some musicians recalled that he had a terrible temper in those days. But as far as I could see he had kicked all that. Who knows what led him to shoot his Chinese wife and blow his own brains out on July 19? Perhaps all the passion that went into his music also had a dark side. Perhaps something just snapped in his brain. But I can't help thinking that if he'd had a guitar in his hands at that fatal moment instead of a gun, we'd still be looking forward to his next visit to the Palm Court. Rest easy, old friend. Your music still echoes in our hearts.
http://www.nola.com/music/index.ssf/2013/07/longtime_new_orleans_jazz_guit.html

Posted by Tom Sancton at 4:48 AM No comments: 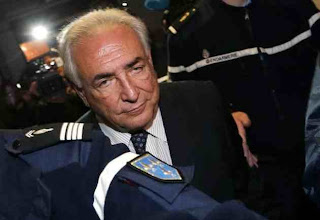 Remember Dominique Strauss-Kahn, the former head of the International Monetary Fund who was accused of raping a maid at the New York Sofitel in May 2011? The one-time French presidential frontrunner got off the hook that time after the New York D.A. dropped charges due to unreliable testimony by the alleged victim. ("DSK" later settled a civil lawsuit brought against him by the maid for a reported $6 million.) Apparently unable to learn his lesson, Strauss-Kahn was indicted this Friday for "soliciting prostitutes" for sex-parties that he admittedly took part in at the Carlton Hotel in Lille. His attorneys predict victory and vindication in a trial that could last as long as one year. The former political superstar better hope they're right: he risks ten years in prison and a € 1.5 million fine if convicted.
Posted by Tom Sancton at 9:10 AM No comments: 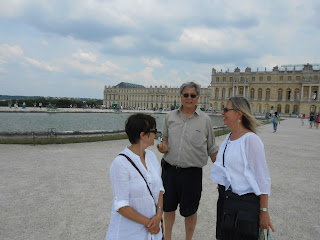 John and Vitirice Rankin's last day with us was devoted to two of France's most majestic sites: the Chateau de Saint Germain, built under François I, and the Chateau de Versailles, home of the Sun King Louis XIV.
We took a leisurely stroll through the gardens of the Chateau de Saint Germain, with a spectacular view of the Paris and its western suburbs from its terrace, and had lunch at an outdoor cafe located in the park. Versailles was even more spectacular, though we did not try to enter the Chateau itself due to the carloads of tourists who formed a line of several hundred yards snaking across the cobblestone courtyard. But the park, with its classical statuary, manicured hedges and dozens of ornate fountains (none functioning at the time, unfortunately) was worth the visit in itself. An added attraction was a series of monumental sculptures by Italian artist Guiseppe Panone.
Back home, John and I worked on some Django Reinhardt tunes—Daphne, Minor Swing, Swing 42, Dounce Ambiance—which we hope to do live next time we get together at the Columns in New Orleans in October. Dinner was at the Brasserie du Théâtre, across the street from the Chateau de Saint Germain, bathed in its golden nightie illumination. Sylvaine and I introduced our guests to several varieties of local oysters (no ketchup or horseradish, only lemon juice or vinegar and shallots), raw mussels, sea snails, and possibly the world's best baba au rhum, liberally doused with Saint James rum and topped with home-made crème Chantilly. The night before, Sylvaine had fed them a rabbit stew (fricasée de lapin) washed down with a nice Macon red, so we had them pretty well acclimated to the French way of life by the time they left.
Posted by Tom Sancton at 5:54 AM 1 comment: 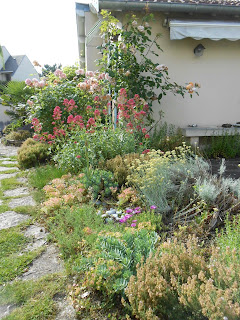 Our arrival at our summer base in the Paris suburb of Saint Germain-en-Laye last month was greeted by a spate of cold rainy weather that the had persisted through much of the Spring. This caused widespread depression among the French (who are easily depressed anyway), though they shouldn't have been surprised. Springtime in Paris is a cruel myth; the season is most often chilly and soggy. Sylvaine and I were not that unhappy about the weather, since we had left New Orleans amid 95 degree heat and steam-bath humidity and found the fraîcheur a welcome relief—like having free air-conditioning inside and out. We even made some fires in our fireplace, which was cheery and cozy, although it was late June. The weather eventually warmed up—it’s in the 80s now, and the French are starting to complain about the heat. The upside of all this is that our garden is starting to explode with late-blooming flowers: roses, hollyhocks, wisteria, lavender... Sun sets late here this time of year, so we sit on our patio sipping cool drinks and listening to the birds sing until past 10 pm while the sprinkler waters our moss-infested lawn. 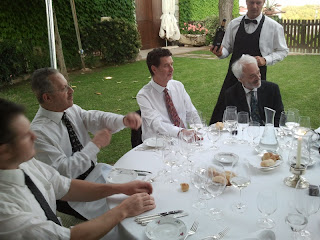 Not that we haven’t been busy doing other things. Sylvaine set about repainting the guest room while I grabbed my clarinet and took off on a brief music tour. On July 1, I played at Switzerland’s Zofingen Jazz Festival with Dan Vernhettes’ Vintage Jazzmen and Gospel singer Denise Gordon. On July 4, I met up with my old friend Luciano Invernizzi for a dinner concert in Castello Colloredo, Italy. This picturesque village near the city of Udine boasts an ancient, crumbling castle and a restaurant with an upscale menu that belies its nondescript name of “La Taverna.”  We played in the Taverna's garden and enjoyed an exceptional meal of asparagus mousse and braised veal. 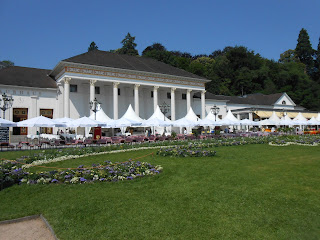 Next day I was off to Baden-Baden, where I linked up with drummer Trevor Richards, trumpeter Clive Wilson, bassist Bob Culverhouse, pianist Simon Holliday, and a terrific Scottish trombonist named Dave whose last name eludes me at the moment. For centuries, the historic German spa at Baden-Baden has been a playground for Europe’s royals, rich and over-privileged. The tradition continues today, though with more ostentatious vulgarity than old world elegance. As we dined at an outdoor curry restaurant near our hotel, we were treated to a display of in-your-face rolling stock that drove nonstop down the narrow cobblestone street: Audis, Mercedes convertibles, BMW roadsters, Ferraris, Porches. The town was crammed with upscale boutiques. Most of the people wandering around the streets sported Swiss watches, gold bracelets, and designer duds that underscored the Germans’ reputation for conspicuous consumption. The next day we played an open-air concert in the garden of the famous Kurhaus, the white-columned 19th-century edifice that houses the town’s casino. Five days after my return to France, I teamed up with bassist Enzo Mucci and guitarist Christophe Davot for a trio job at a jazz-café called the Gramophone in Marly-le-Roi. Next month I hit the road again for another Gospel set with Denise Gordon and the Vintage Jazzmen in Femø, Denmark August 1 and 2. 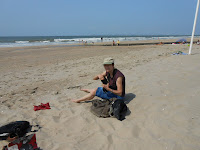 Last week, Sylvaine and I drove to the Normandy fishing town of Saint Valery-en-Caux, where the sun was out but a cold wind was blowing so hard we could hardly stand up. Swimming in the crashing surf was out of the question. So we headed further west and returned via Trouville, where we had a wonderful seafood luncheon on the terrace of the Hotel Central—an old favorite of ours—and sat on the sandy beach for a couple of hours reading (Faulkner for me, a French magazine for Sylvaine) and listening to the wind and waves. 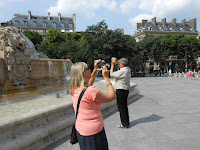 Shortly after our return to Saint Germain, we were joined by visitors from New Orleans: guitarist John Rankin and his wife Vitrice. We have spent the past few days showing them around Saint Germain and Paris, eating and drinking, playing music, and generally trying to make them jealous of the sybaritic French lifestyle. Our scheme seems to be working: they have plunged into their sightseeing adventure with cameras clicking and wallets emptying as they buy the tempting wares of the open-air markets, sip coffee and beer at the outdoor cafes and treat us to lunch at charming little plat-du-jour restaurants. Yesterday we took them around the Latin Quarter—the Sorbonne, Luxembourg Gardens, a superb Chagall exhibition, the 11th-century Saint Germain des Prés church, Saint Sulpice (where the albino monk killed the nun in The Da Vinci Code) et al. Today, they’re off on their own, guidebook and metro passes in hand. If they ever find their way back, we’ll have dinner in the garden and watch the sun set. It’s a tough life, but somebody has to live it. 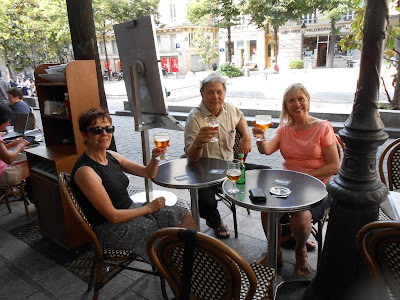